The new line is expected to contribute Rs 200-250 Crore worth revenue annually and margins on EHV cables will be over 15 percent. 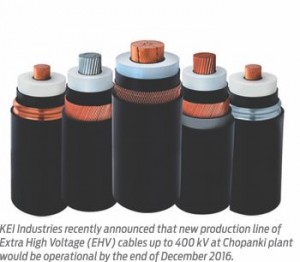 Earlier, the Company had signed Technical Collaboration Agreement with Brugg Kabel for manufacturing of Extra High Voltage cables above 66 kV and up to 220 kV in December 2009 which was later extended in November 2014 for a period of five years. The new agreement however is for the production of EHV cables in the range of 220-400 kV.

KEI Industries recently announced that new production line of Extra High Voltage (EHV) cables at Chopanki plant would be operational by the end of December 2016. With this new agreement with Brugg Kable, KEI sees Rs 250 Crore annual revenue as the agreement will now help the company acquire orders up to 400 kV from various public utilities, private players.

In a TV interview recently, Mr. Anil gupta, Chairman and MD of KEI Industries, “We had signed a technical collaboration with Brugg Kable, Switzerland in 2009 for manufacturing cables upto 220 kV. The company is well established in that space now and now we have set up a new production line in our Chopanki plant which will be capable of producing cables up to 400 kV. And these cables are basically used for underground transmission networks in the city and also evacuation of power from hydel power plants, etc.” He further said that the new line is expected to contribute Rs 200-250 Crore worth revenue annually and margins on EHV cables will be over 15 percent.

A Minimum Import Price for Aluminum May be on Card

Power Transmission Sector Likely to Get About Rs. 260,000 Cr Investment Till 2022