Digital India augurs well for telecommunication cable makers in India. The initiative will lead to a 20 percent jump in orders in each of the next three years and help Sterlite end two back-to-back annual losses, Chief Executive Officer Anand Agarwal said in an interview.

The government’s vow to spend USD 18 billion on Modi’s ‘Digital India’ drive was bolstered this month by billionaires from Mukesh Ambani to Sunil Mittal and Kumar Mangalam Birla, who pledged a combined USD 70 billion in investment. Shares of Sterlite have rallied 53 percent in the past month, compared with a 7 percent gain in the benchmark index.

“The entire program is pretty ambitious, and for us it’s an exciting opportunity for several years,” Agarwal, who isn’t related to the billionaire founder, said in his Mumbai office on July 9. It is “creating a new infrastructure for the country.”

Modi’s administration is seeking to engineer a “digital revolution” to expand high-speed Internet access and offer government services online. Goals include a broadband grid to link 250,000 clusters of villages by 2016 at a cost of about USD5.9 billion and cloud storage for citizens, Communi-cations Minister Ravi Shankar Prasad said in October.

Almost 1.1 billion Indians, mostly in rural areas, have no access to the Internet, McKinsey & Co. estimated in a report last year. “Cities evolved around areas where highways were being built,” Modi said in New Delhi on July 1 at the commencement of the Digital India Week. “But now, development will be around places where there are optical fibers.”

“We’ve already spent the money on creating capacity and now we are focusing on product expansion and delivery,” Agarwal said.

The company, based in Pune near Mumbai, won a 25 billion-rupee contract from state-owned phone operator Bharat Sanchar Nigam Ltd. last year to lay 60,000 kilometers (37,000 miles) of fiber optic cable, giving it a shot in the arm.

Agarwal’s company hasn’t been the only local beneficiary. Shares of Aksh Optifibre Ltd., a New Delhi-based company, have surged 41 percent in the past month.

Sterlite has also managed to secure 15 billion rupees of business from the local defense industry. Sterlite in May said it will spin off its power products and transmission business into a separate unit. That will help the company save costs, according to Rabindra Nath Nayak, an analyst at SBI Capital Markets Ltd.

“The demerger is a positive development as some of the drag will be reduced,” Nayak said. “Data download is getting prominence in the telecom business, so the element of optical fiber content in a network is very important. Sterlite has good potential.” 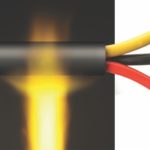 Nexans Inaugurates New Plant in Morocco for Production of...