Cable Insulation Compounds Maintains in GCC on Account of Demand

No petrochemical company will be comfortable with the current business environment. With oil headed for the gutters, there is mounting pressure on the prices. Customers are looking for deep discounts citing the falling oil. Olefins and aromatics are being put through extreme pressure on margins with manufacturers not having downstream integration taking the most hit. It is a fact that there is a strong bond between oil and downstream chemical prices especially in the case of polyethylene, polypropylene – two major polymers consumed in substantial volume by cable industry. However, the economics of scale makes it very difficult for any downstream cable compound makers to offer immediate price cuts purely based on commodities exchange rate. The last four month has seen the WTI Crude Oil lose as much as 50 percent. Such drastic falls have led to a climate of volatility and uncertainty with buyers continuously anticipating lower prices.

The end of the year usually sees a price dip in downstream polyethylene prices typically owing to inventory situation of suppliers. However, this time around the price has still managed to hold steady compared to recent historic prices for the end of year while negotiating for 1Q orders. But in comparison to the price levels prevalent during 3Q and 4Q of this year, there has been a sharp fall for cable insulation compounds. As the chart below shows, the price levels for insulation compounds are still higher when compared to the last two years. Interestingly, the oil price is the lowest this year. 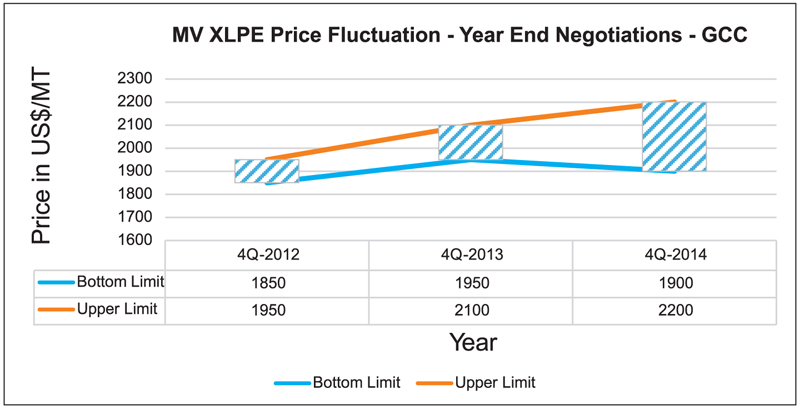 Recently in Saudi Arabia, the government has awarded major tenders in 3Q 2014. They are holding the next round of tenders currently. Saudi Arabian cable companies are, at least as of now, insulated from the economic risk as the government has already committed to major projects. Subsequently, there is robust demand in the region and is being reflected in the pricing levels too. Perhaps this will explain the higher pricing levels that is currently prevalent when compared to the last few years. It will be interesting to see the approach of customers in the near term where they will have to ensure sufficient inventory while at the same time look to capitalize on the lower feedstock prices. The balance will be the key for the buyers. From the cable compounder’s perspective, it is imperative to commit as much quantity as possible for 1Q and 2Q at current pricing levels with the volatility that the market is witnessing. Manufacturers will be forced to cut prices to maintain market share and to sustain in the market. Any benefit from the lower feedstock prices will only accrue in the subsequent quarters for the manufacturers. 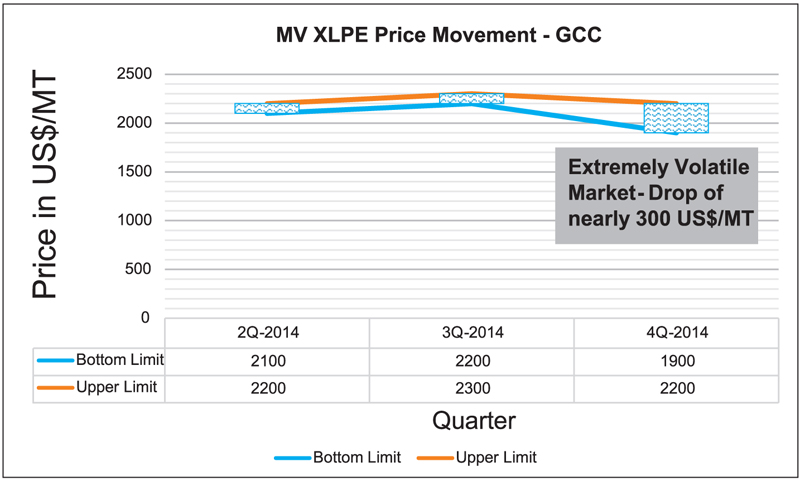 While the customers will be closely watching the oil price to conclude attractive deals, another major factor that will influence business in the GCC region will be the strength of the respective governments to withstand the falling crude. With most countries having made their 2014-2015 Budget at significantly higher oil prices, there is bound to be repercussions. We are already witnessing some fall out of sorts beginning with Oman. Very soon the effect will be reflected in the neighbouring countries as well. It will be a test of resilience among the oil producing Gulf Countries with OPEC deciding not to cut production in their last meeting in November 2014. Saudi Arabia seems to have had their way in convincing members to hold on to the current levels of production, in the process letting the prices continue their downward fall. The fate of majority of big investment projects currently running will depend on the financial muscle of the respective governments. While Saudi Arabia, Kuwait and Qatar have built up forex reserve on account of high oil prices in the last few years, the current prices may not be sustainable for the long run. It is crucial for oil to find a stable spot at the earliest.

The pain of the GCC region will translate to major gains for India, China and other European countries who are major importers of oil. Not only will the net cost of various items go down, the lower oil prices will enable government to have more arm power with reduced import bills. For India, whose Current Account Deficit is greatly dependent on the energy bills, the lower price will provide crucial cushion for public spending. Subsequently a pick-up in the infra segment would be keenly awaited.

*He is responsible for the Wire & Cable division of STARPOWER, a marketing firm representing various Power Cable raw material manufacturers and is based in Jeddah, Saudi Arabia. He carries with him over 7 years of experience spanning consulting, strategy, client management and is currently focussed on developing market trends and research reports on Middle East market for the Power Cable Industry.