Gujarat signs MoU for UDAY, Six MoU for 24X7 power for all signed at ELECRAMA-2016; ELECRAMA to be the front runner in mapping the growth of the Power Sector in the country, says Hon’ble Minister Mr. Piyush Goyal

Ever since its inception in 1990 by IEEMA, ELECRAMA has grown to become the largest and most prestigious event in its space in the world. The 12th edition of the show, ELECRAMA-2016, was held from 13 to 17 February 2016 at Bangalore, India. ELECRAMA provides the industry a worldview on technology, best practices, new systems and forecasting the trends in the future of electricity, both from technology and a socio-economic point of view.

Founded in 1948, IEEMA is the first ISO certified industry association with 800 plus member organizations encompassing the complete value chain in power generation, transmission and distribution equipment. IEEMA plays a crucial policy advocacy role with government and its agencies. IEEMA Journal, created by IEEMA (Indian Electrical & Electronics Manufacturers’ Association), is the mouthpiece of the Indian Electrical & Industrial Electronics. IEEMA evolves and operates equitable and uniform PVC Clause and due to its unbiased approach, IEEMA PVCs have gained recognition and credibility over last 3 decades. IEEMA holds product specific conferences, seminars and large exhibitions like ELECRAMA which is world’s largest event for T&D equipment industry.

The inaugural of ELECRAMA 2016, was attended by more than 700 people comprising of State Ministers, Energy Secretaries, officials from Minister of Power and CEO’s of leading corporates. With a robust range of concurrent events happening parallel to the exhibition like the World Utility Summit, Reverse Buyer Seller Meet which saw business of $200mn in last edition, CEO Summit, the world’s largest International T&D Conclave, Network to Networth and Innovation Day. A separate renewable energy pavilion has been set up to showcase and discuss the latest developments in the renewable space.

The World Electricity Forum witnessed the signing of seven MOUs for 24X7 power for all between Union Ministry and state governments of Maharashtra, Punjab, Sikkim, Odisha, Karnataka and Kerala on its inaugural day. Also, Gujarat signed the MoU for UDAY scheme of the Central Government.

Mr. Babu Babel, President, IEEMA said, “ELECRAMA has evinced huge interest from across the globe. The government and various ministries have accorded their support which emphasizes the prime role that ELECRAMA plays in the electrical industry and reinforces the prominence of IEEMA as an association. We are proud to host the 12th Review Planning and monitoring meeting which is being held at ELECRAMA this time and I am happy to announce that along the sidelines of ELECRAMA seven states are signing MoU for 24X7 Power For All”.

ELECRAMA 2016, Organising Committee Chairman, Mr. Aaditya R Dhoot added, “With a unique theme this time called ‘World Electricity Forum’ ELECRAMA-2016 is all set to congregate the electrical fraternity under one roof and bequeath implausible platform for the players to promote innovative solutions and cutting edge technology for future. Also for the first time in ELECRAMA with the help of ministry of Power, the Review Planning and Monitoring meeting is held at the venue where the top decision makers from all states and central government interact and discuss key challenges and opportunities in the power sector”.

Speaking during the inauguration, Mr. Piyush Goyal, Minister of State (IC) for Power Coal, New & Renewable Energy, Government of India, shared that large ticket opportunities coming in the immediate future for electrical industry in India. He said, “The industry needs to ramp up its capacities in transformers, switches, LED lights, etc. as a large-scale procurement would be initiated by Central and State governments. He further hinted that, the quality of products needs to world class. The industry needs to be benchmarking itself against the best in terms of qualitative and quantitative aspects.

“Also, the government has set an objective of providing electricity to all villages without power currently to be electrified within two years. On 15th august, last year, our PM promised to electrify the remaining villages within 1000 days, but my officials promised to make this possible within 730 days. The world’s largest project of renewable energy is about to take off in India. All of this is an opportunity for the members of IEEMA.”

He further added “The entire power sector is present at ELECRAMA to support Hon’ble Prime Minister Modi’s vision of providing 24X7 electricity to all and I must say that this dream cannot be fulfilled without the support of all of you. The level of enthusiasm, of members, officials and the participants, is truly amazing. I compliment the participants who have come from all over the world. We want ELECRAMA to be the frontrunner in mapping the growth of the industry and also I urge all of you to make quality products and aspire to become best in the world. If India decides to become the best in the world, we have the best class technology and I assure that within 24 months every electrical component of the electrical equipment industry will be made in India.”

Hon’ble Minister of Heavy Industries and Public Enterprises of India, Mr. Anant Geete inaugurated the International T&D Conclave on 16th February during ELECRAMA 2016. The theme of the conclave is Technology & Demand. The focus areas of discussion are challenges faced in integrating renewable energy with the main grid and how to reduce distribution losses. Post the Conclave; IEEMA will submit a white paper to the  Government of India, outlining a viable plan of action for the Government and the Industry.

Speaking on the occasion, Hon’ble Minister of Heavy Industries and Public Enterprises of India, Mr. Anant Geete said, “Through ELECRAMA 2016, the electrical industry is showcasing the future of innovative technologies in electrical sector. I thank IEEMA for such an initiative and the ministry will provide full-fledged support to IEEMA endeavors. Some of our public sector enterprises are facing tough competition from Chinese manufacturers. There is pressure on BHEL, there is pressure on steel companies. The public sector can compete with China only when we empower their managements to take the appropriate decision for growth of their organization. Moreover, I want to assure the Indian electrical industry and IEEMA that I will take the leadership to resolve the challenges of the industry.”

Mr. Vijay Karia, Vice Chairman, ELECRAMA 2016 added “When we talk about technology and demand automatically all the issues that we are facing today, in terms of losses and its reach to the end customer gets addressed in a large way. The International T&D Conclave is focused in bringing value first to the country as a whole. As there is no single platform where these issues faced by the various states are being discussed”

The panel consisted of eminent International and Indian experts from the respective domains. The Conclave offers an opportunity for the Industry to understand how they need to structure themselves to meet the challenges of tomorrow. It is an opportunity for the Utilities and the professionals from power sector to know where the latest technologies are going worldwide. 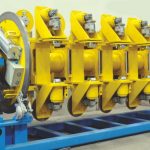