Scheduled to open in 2023, the Canakkale 1915 bridge will be a steel-built infrastructure first, spanning the Dardanelles strait that separates the European and Asian continents.

As the Turkish government undertakes an ambitious infrastructure investment programme, parts of the country are being transformed by new mega tunnels and bridges. The Canakkale 1915 bridge is one such project, conceived to open as a tribute to mark 100 years of the modern Turkish republic.

The North Western region of Turkey functions as an important connection between Europe and Asia, with ground traffic currently funnelling through the narrow stretch of land surrounding Istanbul which leads on to the borders of Greece and Bulgaria.

Turkey’s rising economic growth as a result of agricultural expansion, increased transit links and the country’s growing popularity as a tourist destination, has led to serious congestion around its major cities.

The growing struggle facing the existing transport system has caused the government to announce its Vision 2023 programme, which aims to boost capacity across road, rail and sea networks.

The suspension bridge is being constructed in the north west Turkish province of Canakkale and will service the 320km-long Kınalı-Tekirdağ-Çanakkale-Balıkesir motorway which will connect the Anatolian peninsula and East Thrace once completed. Currently, this journey requires a 30-minute ferry ride, but once the bridge is in place this will be reduced to a short drive of just 10 minutes

With the span between its two towers sitting at 2,023 metres, the Canakkale 1915 is set to become the world’s longest suspension bridge, outstripping Japan’s Akashi Kaikyō bridge by 32 metres. Its full length, including the approach viaducts, will stretch to 4,608 metres.

Formed of a reinforced concrete deck, the bridge structure supporting the road surface will be underpinned by a pair of shear-connected longitudinal steel box beams. These will in turn be interconnected by steel crossbeams that sit on external cantilevers.

The 45-metre wide deck is expected to handle large amounts of commercial and private traffic, with three lanes moving in both directions and maintenance walkways on either side, contributing significantly to the socio-economic development of the region.

The towers, which sit on a pair of steel platforms each mounted just above sea level on massive 65,000-tonne submerged caissons, will make the bridge the fourth tallest in the world, with its striking design stretching 318 metres into the sky.

Once completed, the Canakkale bridge will have seen 128,000 tonnes of steel deployed in its construction, a mammoth undertaking for a single company.

As such, the steel elements of the bridge represent a strategic partnership between Turkish and South Korean suppliers, with Turkey’s Çimtaş steel and POSCO agreeing to supply 35,000 tonnes of heavy steel plate for the tower structures, cabling systems and road surface. 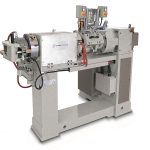 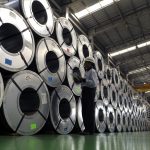