Insulated copper wires are used in windings for electric motors, generators and transformers. The automotive industry’s entry into electric mobility has created new challenges for manufacturers of enamelled wire.

Usually, round wires are used. However, in large transformers (e.g. in power stations), enamel-insulated rectangular wires have been preferred for decades, because they significantly improve power density and efficiency.

The enamel-insulation is very thin with a layer thickness of 50 to 150 µm. The lacquer is applied in 10 to 20 layers, i.e. the individual layer might be just 5 µm. Whilst the bare wire passes a lacquer bath and a calibration nozzle, spare lacquer is stripped off. Repeated passaging hot-air oven burns in the layer.

Due to the small layer thickness, the first calibration nozzle is only a few micrometres larger than the bare wire. If the wire does not have the correct dimensions, enamel coating might be either too thin or too thick and insulation faults occur, which then lead to failure of the winding during operation.

The production of high-precision enamelable rectangular copper wires is much more difficult than the production of round wire. If drawing dies are used, a significantly worse – because asymmetrical – lubricating film of the cooling fluid is formed compared to drawing round wires. At speeds above 60 m/min, the lubricant film begins to crack in the area of the edge radii. A failure of the drawing die is the consequence. When drawing round wires, much higher speeds of up to 3000 m/min are achieved due to the more beneficial lubrication conditions.

In addition to this speed restriction, another reason not to use profile drawing dies is the low degree of standardisation in transformer construction. Nearly every project requires different wire dimensions, so that short-term procurement or stockpiling is a considerable logistical problem.

Furthermore, the speed of enamelling lines for rectangular wires is significantly lower with a maximum 25 m/min than that of round wire lines. Here, asymmetry is the main reason making uniform enamelling difficult at higher speeds, too.

In order to achieve higher production speeds and a high degree of flexibility, rectangular copper wires for transformer construction are usually not produced in line with enamelling lines, but are rolled, coiled and insulated in high-performance rolling mills in multi-core enamelling lines. For this application, FUHR has been developing and selling rolling mills for many years, which meet the requirements of the transformer industry for precision, flexibility and productivity. These machines have been continuously optimised. Typical production speeds today range from 200 to 800 m/min, depending on the producible cross section. One rolling line supplies approx. 8 to 15 painting lines.

State of the art is a rolling mill with five rolling steps: two two-high mills and two round-rolling mills are responsible for the pre-profiling. The final calibration is carried out in FUHR’s WST-type, universal profile rolling mill.

The automotive industry relies on enamel-insulated rectangular wires and requires manufacturers to prove that no wire damage occurs before enamelling. Even when using the best winding and unwinding systems, it cannot be guaranteed that the bare wire will be free of damage during offline production. This results in the task of inline production. However, a rolling line is not getting cheaper just because it is slower. Following that, the concept of a 5-stand rolling mill cannot be retained for inline profiling.

Other than in transformer construction, standardisation in the automotive industry is exceedingly high. Typical plants manufacture the same product for months or years. Therefore, the use of profile drawing dies in this area is possible in a sensible way, even if technical developments should increase the possible lacquer speeds to up to 60 m/min in the future.

With the IPU320, FUHR has developed an economical inline profiling system with which the manufacturers of enamelled wire can meet the high requirements of the automotive industry for quality and price. The IPU320 combines rolling and profile drawing processes, whereby large width to thickness ratios can also be achieved by driven rollers.

Besides a low price, one of the most important requirements during development was uninterrupted operation for months.

The IPU320 is equipped with a closed control system, which does not require an electrical interface to the paint spray line. The required space is kept at a minimal size with 2 meters. Therefore, retrofitting in existing paint spray lines usually is possible without having to adapt the existing system.

FUHR will exhibit an IPU320 at the Wire 2020 in Düsseldorf (Hall 11, Stand A50) and present the production of rectangular copper wires “live”. 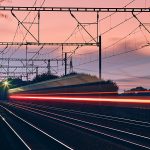 On the Right Track: Railway Electrification in Full Swing 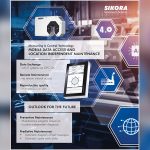 SIKORA and Industry 4.0: Inline quality control for an autonomous manufacturing